The trouble with testing is that you have no control of the weather. As a result result of rain, and a track that was slow to dry, the MotoGP field lost half of the first day of the two-day test at Misano to wet conditions, with little use made of the track. The test riders were sent out as sacrificial lambs to put in laps and collect data in the wet. But Fabio Quartararo also put in some laps in the wet, to try to get a better feel for the Yamaha M1 in the wet, conditions they struggle in.

The wet-weather brake disc covers on the Yamaha M1

Those wet laps were useful for the championship leader. "In the morning I tried to make some laps but the track conditions were changing a lot, but from the first lap I could clearly see where the problem is with our bike and I think that we need to find a solution to that… But it's true that it's quite difficult to know what is happening," Quartararo told us at the end of the day.

Yamaha had the first prototype of their 2022 machine there, with both Quartararo and Franco Morbidelli trying the bike. Initial feedback was positive. "We tried the new chassis for 2022, but yes it was nice, I didn’t make a lot of laps because the team didn't want me to make so much and they have more things to test," Quartararo said. "But the feedback was quite good and I think it's quite positive. It's quite great but I don’t want to speak too soon because I don’t make so many laps, but the feedback was not better and not worse."

It must have been quite good: Quartararo set his fastest time of the test on the bike, finishing sixth with a lap of 1'31.980 on use tires. "I made my fastest lap time with 15 laps on the tire," the Monster Energy Yamaha rider said. "To make a 1'31 with old medium is really nice and I did it with the new chassis. So I think it's really positive."

His teammate, Franco Morbidelli, also rode the new chassis, but would not be drawn on it, claiming he had not had enough experience with the 2021 Yamaha M1 to say much about how it felt. "I felt some differences. Of course it's difficult to explain them now, because I don't have very many kilometers on the 2021 bike, nor on the 2022 bike, or any bike. So I need some more time, some more kilometers for sure. But it was just good to jump on a 2022 spec, or what seems to be the direction of the 2022 bike, and appreciate some things," Morbidelli said. He would only admit that the bike did one or two things better.

Trying to discern what has changed is hard, but from photos, there are clearly visible differences. First, here is the bike raced by Fabio Quartararo, easily identifiable by the scrutineering sticker on the upper frame.

Below is a new version of the frame, anodized black. The biggest difference is a deeper and shorter indentation in the frame upper, at the edge of the tank. That suggests that Yamaha are altering stiffness, but it could also be a necessity to make room for the riders legs in a marginally wider frame. Why wider? Perhaps there is a slightly larger airbox under the tank. Yamaha is known to be chasing horsepower.

Interestingly, Yamaha also debuted a similar looking chassis in polished aluminum. These are usually Yamaha's main test frames, only getting anodized once they approach something like their final form. The frame label reads YZR-M1-B-21T1.

Ducati and Aprilia seemed to be working mainly on aerodynamics. Aprilia had what looked like a slightly different nose and intake, though largely similar to their existing bikes:

Aprilia were also working on aero solutions around the front wheel. One large cover for the front of the forks and a scoop to channel air to the brake caliper:

And a pod which completely enclosed the fork lower, guiding air around the fork and onto the oil cooler.

Also visible in the above photo is the canister powering Aprilia's automatic ride-height device, which is engaged on corner entry, then activates when the front suspension unloads under acceleration. The key work here is on mapping the rate the rear lowers, and the amount. From the shots of Maverick Viñales along the front straight, it looks like that amount is "quite a lot".

Ducati had a new fairing, which Pecco Bagnaia spent testing. For comparison, here is Johann Zarco on the standard GP21:

And below are some shots of Pecco Bagnaia on the new fairing package. What is clear from the photos is that only a portion of the fairing has been altered: certain parts – the lower ducts, for example – are still the original Ducati red.

The winglets look very similar to the ones currently in use, but the fairing shape, and especially the upper part is quite different. The top part of the fairing looks significantly smaller and more slender than the current bike.

The air intake also looks very slightly different, though that could be an artifact of it being plain black.

Honda also debuted a new bike, an evolution of the machine which first appeared at the Jerez test back in May. More photos of that bike are coming tomorrow, from MotoMatters.com contributor Niki Kovacs. But it's clear that it's a very different bike. The machine, which both Marc Marquez and Stefan Bradl rode, has a very different air intake, which looks much more like a Yamaha R6 than the long, wide "basking shark" intake which has graced the Honda RC213V since 2014.

That suggests a very different airbox, and a different engine. Yamaha changed their engine from 2019 to 2020, and the air intake was the main signifier. Honda riders have complained of engine braking and a lack of acceleration, and this is likely to be a part of that.

The other significant feature – apart from different wings – is that the upper exhaust no longer exits from the center of the tail unit, but from the side. That is because there is a 'salad box' style section under the tail, which, it seems reasonable to assume, contains some form of mass damper, just as the Ducati and the Aprilia do.

Finally, the Suzuki. Both Joan Mir and Alex Rins tired the evolution of the 2022 engine, which produces more power. "I'm quite happy, because it's working a little bit better, more powerful," Alex Rins said. Tomorrow, the Suzuki riders will focus on the 2022 chassis and work further on the ride-height device. 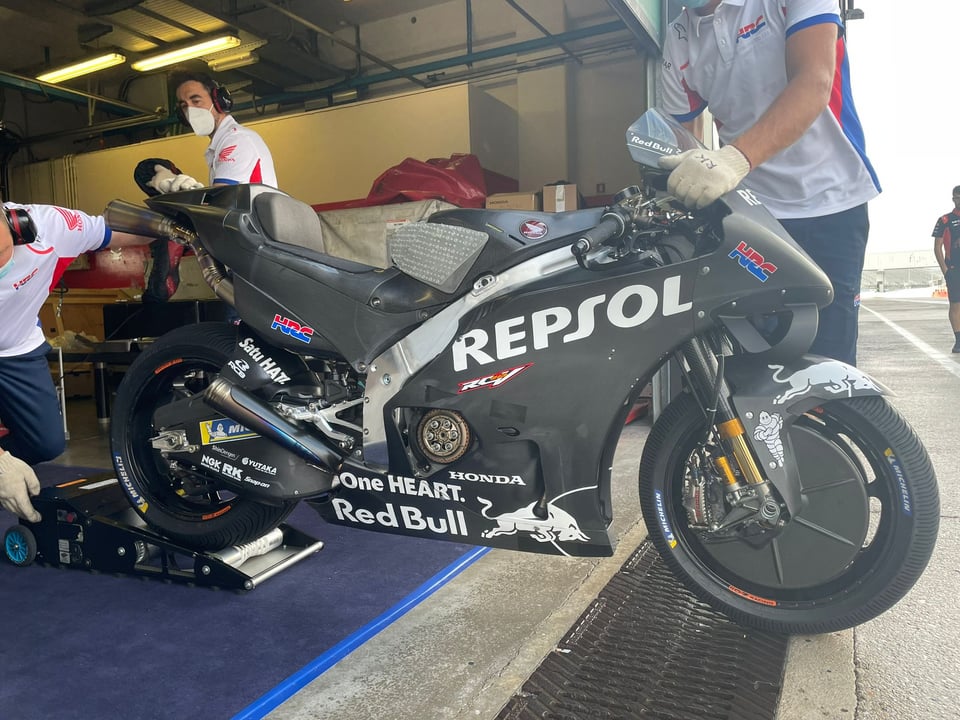 Could they be going for the low + long geometry of the Ducati/Yamaha? Seems like an easy way to get rear traction.......... of course at the expense of their trademark agility

Difficult to say. Snout looks a little longer, maybe just slimmer. Wings have shifted forward. The new Ducati fairing looked slimmer too but it's hard to say when it's dressed in black.

The clutch basket looks lower on the new Yamaha.