It was a good day for attention-grabbing headlines at Mandalika. Pol Espargaro ended the day with a scorching lap which took him under the WorldSBK Superpole by four tenths of a second. There were six different manufacturers in the top six. The lead on the first day changed hands time after time in the last couple of hours.

But the headlines don't really mean very much. Times were dropping because the track started off filthy and only really started to clean up in the last hour or so of the day. This is the first outing at Mandalika for MotoGP, so the teams and factories have very little data to go on, with teams working on such basics as figuring out the best gearing for the track.

The track was incredibly dirty, because it is still in the middle of a building site and has not been used since WorldSBK left the circuit back in November of last year. There has been plenty of building work done, the pit complex is much closer to completion than November, but the combination of building work and torrential tropical rains left a lot of dirt and mud on the track.

There has been a huge step forward in Marc Marquez' recovery from diplopia, the double vision he suffered as a result of a crash riding enduro. After consulting with the doctor treating his eye condition, the Repsol Honda rider was given the go ahead to ride a motorcycle again. Using the lessons of his previous bout of double vision - after the monster crash in practice in Sepang 2011 - Marquez was cautious in his choice of venue, deciding to ride a motocross bike at his local track in Lleida, Spain. In 2012, he had first ridden a bike at Alcarras, at a track shared with BSB teams. News of his ride quickly leaked, something which was less of a concern at the MX track in Lleida.

Marc Marquez on track in Barcelona 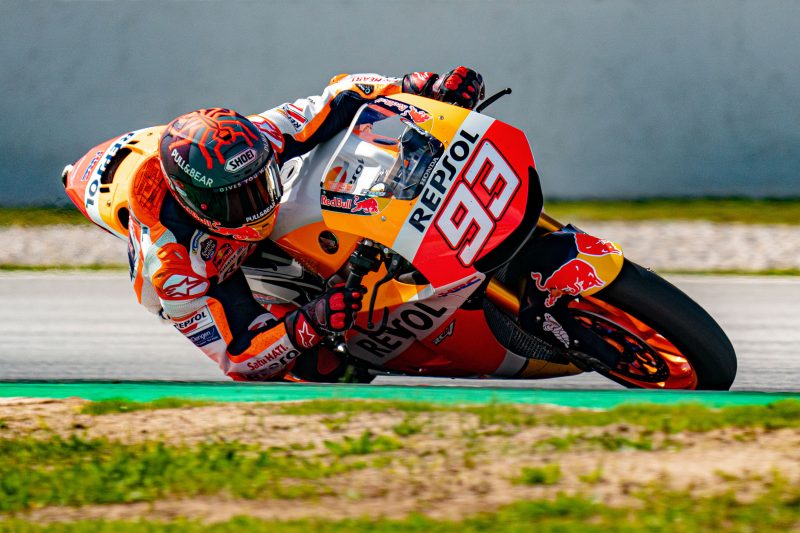 Marc Márquez' absence has left a gaping hole in MotoGP for the last seven months. Sure, the racing has been fantastic, and Joan Mir was a worthy winner of the 2020 title. But the fact that the man who won six of the last eight championships was missing from the series was the elephant in the room throughout last season, a presence noted all the more for his not being there.

The significance of Márquez' absence has been made all the greater by the near total radio silence out of the Spaniard's entourage. With the exception of a single interview given to Spanish TV broadcaster DAZN, the only thing that we have heard from Marc Márquez have been leaks from various sources around him.

The last time the general media had a chance to speak to the six-time MotoGP champion was last July, at the second round at Jerez, after his abortive comeback from the injury sustained in the first race. Márquez shattered the humerus in his right upper arm when he crashed out between Turns 3 and 4 at the opening MotoGP race of the season at Jerez. Márquez was doing push ups just hours after surgery, and decided to try to race at the Andalusian Grand Prix at Jerez, just a few days later.

The Repsol Honda team issued transcripts of the interviews from the Repsol Honda online launch. In the video, Marc Marquez talked about his recovery, his injury, and his expectations for 2021. Below is the transcript, the questions were asked by Honda PR:

Q: First of all, Marc, how are you and how is the recovery?

Here at last, after the delay caused by Jorge Lorenzo breaking his scaphoid just before the team launch: The 2019 Repsol Honda MotoGP livery shots

Marc Marquez has returned to training on a motorcycle for the first time since having surgery on his shoulder in December last year. To mark the occasion, the Repsol Honda team issued the following press release, containing a video of Marquez riding and explaining what he found easy and difficult on the bike. The press release appears below:

After the team presentation at the Repsol Campus in Madrid, the Repsol Honda Team issued the following press release. Unfortunately, as a result of Jorge Lorenzo's injury, HRC were unable to do their normal full photoshoot with the team. A full gallery of the bikes will be available next week:

The Repsol Honda team issued the following press release after the launch of their 2016 campaign at a packed Sentul Circuit in Indonesia, where crowds thronged despite heavy rain:

The Repsol Honda team issued the following press release after the first day of testing at Jerez, complete with photos: