MotoGP Testing At Kymiring In Finland Gets Underway

Testing has come to an end after the first ever day of MotoGP action at the Kymring in Finland, six of the test riders for the six official MotoGP manufacturers turning some laps at the newly built circuit. Present were Stefan Bradl for Honda, Jonas Folger for Yamaha, Sylvain Guintoli for Suzuki, Mika Kallio for KTM, Michele Pirro for Ducati and Bradley Smith for Aprilia. Kallio was chosen over KTM's other test rider, Dani Pedrosa, to give the Finnish rider a chance to ride on his home track.

The test was convened mainly to give Michelin a chance to understand the stress the track will put on the tires. Although they have software which can simulate tire loads and wear based on the layout of the track and the abrasiveness of the surface, measured using special molds, that is always an approximation. Only actually riding on the track gives a complete picture of how much stress is placed on the tires, riders sometimes finding ways to go faster than models predict.

Conditions were far from ideal for tire testing, however. The day started with rain, and though skies cleared occasionally, the track never really dried out. Wets were used all day, and the rain and fresh construction meant the track was also quite dirty.

Stefan Bradl crashed halfway through the day, falling at Turn 17, the last corner but one. Bradl was unhurt, but the crash briefly brought out a red flag.

Lap times under the conditions were in the range between 2'10 and 2'12, but given the track was both wet and dirty, it is hard to draw any conclusions from that. Wet lap times are usually around 10% slower than dry lap times, so a normal dry lap should be somewhere between 1'55 and 1'58, in all likelihood.

There were several people present at the track. Israeli journalist and TV expert Tammy Gorali posted photos and a few impressions from the track, which you can find on her Twitter feed here. Finnish local and volunteer marshal Juha Mönkkönen also posted a series of impressions of the track on his Twitter feed. Juha will be at the track on Tuesday, and so will hopefully post more tomorrow.

The test continues on Tuesday, with riders on track between 11:00 and 18:00 local time.

Eighteen turns, lots of 1st and 2nd gear areas, off-camber turns - sounds like a slow track that on paper Ducati will suffer and Marquez will excel. Might be a parade track for the Motogp class. Standing water doesn't sound cool either. The last thing Motogp needs is another karting track to compete with the Sachsenring for the slowest on the calendar. Well, at least the Moto3 guys might like it, and the Moto3 class always has exciting races. Hope the KymiRing doesn't come at the cost of Brno. Many riders love Brno and it offers up the potential for close, exciting racing.

Edit: Actually I just did the math on David's 1'55" lap time estimate and the average speed is 147kph - 17kph slower than Sachsenring...It really is a karting track (with a 1.2k straight - the longest on the calendar. The twisty sections must be very slow or the lap times will be less). Sounds like a track of polar opposites or extremes - the longest straight combined with the slowest infield.

"If I need to say something now, I believe there are some corners that we need to change," said Kallio.

"Basically we need to have some kind of gap between the corners. Now the bike is turning to the left or right all the time, and that's not ideal for MotoGP [bikes].

"So we need a little bit longer straights between the corners. That's my opinion."

Kymi Ring should follow the Red Bull Ring on the calendar. Spielburg is the track with the fastest average speed where bikes spend the most time at zero lean angle and full throttle. Kymi Ring looks to be the track where the bikes will spend the most time on the edge of the tire. And at 1' 47.54" (Smith's best time of the test) even taking into account the 2 or 3 seconds of improvement during the race weekend, Kymi Ring will take the honor as the slowest average lap speed on the GP calendar. It will be interesting to see what the racing is like.

The new circuit does seem to avoid crossing railroad tracks... 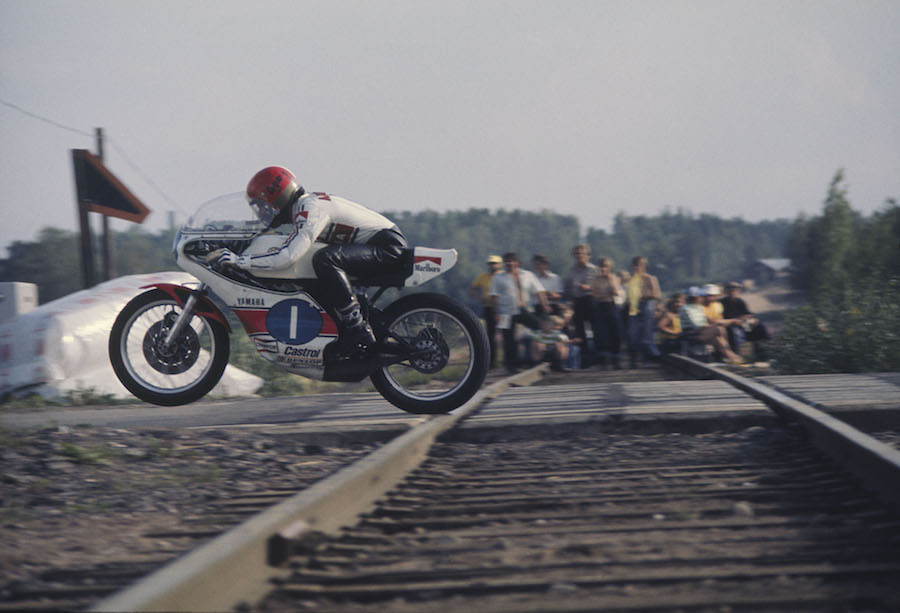 Ago getting top marks for form over the tracks. Beautiful front wheel lift and weight distribution (while maintaining a full tuck!). And no, Sunny Jim, that is not a section leading from the paddock to the Course. That was the bloody course! Please note the size of the drop from the rails to the center cross-ties.

Here is Bazza having a go at a later event...

Also note that like Giacomo he is way to the left to set up for the following corner. Good. I mean, how challenging is racing over railroad tracks when you can ride in the middle bit?

A negative: The former spectator access was superb! Of course, you had to move your viewing kit to the side between sessions when a train might come thru (you know, like the one impatiently waiting in the background of the second pic). I doubt spectators at the new circuit will have the same intimacy.

But that may be offset by another another modern improvement: Safety! It appears now to be a top priority compared to the former layout...when it consisted of lashing a mattress to every seventh fir tree (which at places were about 10 meters off the circuit proper), a couple of water-proofed hay bales, and what appears to be a strategically located case of Purina Moose Chow.

I will keep an open mind about the new KymiRing until the lads get there as a mob. But if things go pear shaped, the organizers can simply let Vale and Marc have a go at each other in 125cc Karts. I would pay double for that. Cheers.

Moto3 will be great.

Otherwise rather shite. But, trying for a silver lining, variety. May be a Suzuki heaven? That is a stretch. Half of the track is just not suitable for anything bigger than a 600.

There are some WAAAYYY better tracks we could put on the calendar, don't you think? And it would be nice to get to Russia, India etc in terms of where geographically.

About India. india loves motorcycles. India runs on motorcycles. Hell entire families of 5 ride on 1 motorcycle! Motorcycles get passed on generation after generation. They are huge Valentino Rossi fans. India has Buddh International racing circuit which despite being a Tilkedrome seemed to be a place F1 drivers loved to race at. I drove it in an F1 game a few times and it was a fun and challening track with bits of Sepang in it I felt. Dorna should really approach India. Though knowing the Indian government they will allow the  event to happen for a few years then get greedy and all will go to hell. This kymring or whatever track seems a bit boring. I don't like Sachsenring at all.

Good reason not to go there then.....

India has rules for the sake of rules. India has been attempted before (maybe WSBK) and trail of paperwork, permits and bribes is endless.

It's a bit worrying that the riders didn't exactly give the layout a thumbs-up. As a blank-sheet design in a massive area why did they go for tight, twisty and slow? It's not exactly a secret that fast and flowing = good, tight and twisty = bad. And if there's one thing that really annoys me about modern track design, why include so much negative camber?

At least there is still time to alter the layout, although the cynic in me thinks the developers will come up with an excuse not to.

From my first glance at the track design I thought "Tilke".  On this occasion it is not Tilke, but someone channeling him.  If they had a cast iron F1 contract then you could sort of understand it, but the biggest drawcard they have right now is MotoGP, and to me this looks like a terrible track for Motogp.  Of course we hope it will be better than it appears, but 18 turns in 4.6km looks ominously tedious.  No motorcycle racer had any input to that track design surely?

Hi Breganzane, my apologies for the Monday after Assen.

Apparently Apex Circuit Design is the company behind the development of the layout of the Kymiring.

They are aslo involved with a proposed new circuit at Mount Panorama, Bathurst, & have been for some time now. Looking at the Kymiring circuit I'm not confident the extra track at Bathurst will be any good for motorcycles. Apex design director Dafydd Broom talks about building a great facility, "the best circuit in Australia" and " best circuit in the southern hemisphere", seems like hype to me.

Great meeting up in Holland, how long ago it all seems now I'm back in normal life again!  No worries re Monday, travel logistics are always a challenge.

The Kymiring track sounds like a disaster for MotoGP... unless he's been quoted out of context Pirro was utterly scathing...

What a disappointment!  Mind you, it would probably be a great track for clubbies or trackday punters.  Depends on the audience they're chasing.  But if the track designers knew their stuff, surely they could have catered for both clients with some clever use of topography and different layouts.

The first time I saw a map of the layout I figured it looked too tight and tedious as a Motogp track.  If the same clowns are in charge of the Bathurst Mk2 track then I don't hold out much hope there either.  Mind you, being Australia in this day and age I doubt it'll get built at all.  If it does, the control tower will collapse after 2 years.  :D

Sounds like that’s what the design is; build for F1 & they will come. Probably the golden ticket in this part of the world, makes even more sense if they’ve got MotoGP first along with FIM/FIA homologation. Shame, they could’ve built a Mugello but it appears they’ve ‘Tilked’ a Shanghai, we shouldn’t be too surprised.

I’m more worried about Gollum Ecclestone turning up at Spielberg, deeply troubling. He doesn’t waste time poncing around a grid, he’ll have something up his trouser leg...