Circuit Of The Americas Lays Off Staff, Suspends Activities Indefinitely

The Circuit Of The Americas also hosts an amphitheater, where large concerts are held, and a USL soccer team, Austin Bold. The Austin mayor has banned large events, and USL has postponed their season for 30 days. That led to COTA deciding to lay off staff, though COTA Chairman Bobby Epstein would not be drawn on exactly how many, when contacted by the local American-Statesman newspaper. MotoMatters.com has also contacted the circuit for clarification, but we have yet to receive a response to our questions.

It is unclear what this means for the long-term future of the circuit. All will depend on when events can resume once it is clear how the coronavirus outbreak has developed. At the moment, the MotoGP round in Austin is still scheduled for November 15th. But like the rest of the MotoGP and WorldSBK calendars, everything is provisional at the moment.

Below is the statement the circuit posted on Social Media and its website: 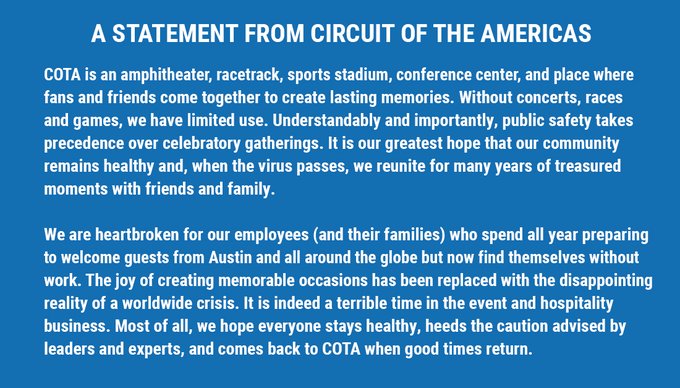