Thomas Morsellino is a French freelance journalist and photographer, with keen eye for the technical details of MotoGP bikes. You may have seen some of his work on Twitter, where he runs the @Off_Bikes account. Peter Bom is a world championship winning former crew chief, with a deep and abiding knowledge of every aspect of motorcycle racing. Peter has worked with such riders as Cal Crutchlow, Danny Kent, and Stefan Bradl. After every race, MotoMatters.com will be publishing a selection of Tom's photos of MotoGP bikes, together with extensive technical explanations of the details by Peter Bom. MotoMatters.com subscribers will get access to the full resolution photos, which they can download and study in detail, and all of Peter's technical explanations of the photos. Readers who do not support the site will be limited to the 800x600 resolution photos, and an explanation of two photos.

Ducati GP19 swingarm attachment
Peter Bom: The now (in)famous aerodynamic modification on the Ducati, which they claim channels extra air onto the rear tire, which keeps it cooler and improves performance. Since its introduction, we have also seen a similar device on the Honda RC213V, and we expect to see more at Jerez.

Honda RC213V swingarm attachment, side view
David Emmett: Compare and contrast Honda's swingarm spoiler (above and below) with Ducati's above. Honda's spoiler is much shorter than Ducati's, and is concave, rather than convex like Ducati's. One reason Honda's spoiler is shorter is because the fairing lower is different. The bottom of the Honda's fairing is higher than the bottom of Ducati's fairing, meaning there is more of the rear tire exposed to the air anyway. This may also be why the Ducati requires the front wheel covers to guide the airflow onto the spoilers. The shape of the spoilers are also different, and interesting. The Honda has a single wing or airfoil in its spoiler, which is concave. That would suggest the airflow is channeled differently on the two different bikes. A convex spoiler would shift air toward the sides of the tires. A concave spoiler would concentrate air on the center of the tire.

Behind the fairing on the Ducati

KTM Moto2, with the tail section and tank removed

If you would like access to the full-size versions of these technical photos and all of Peter Bom's explanations, as well as desktop-size versions of the other fantastic photos which appear on the site, you can become a site supporter and take out a subscription. A subscription will also give you access to the many in-depth and exclusive articles we produce for MotoMatters.com site supporters. The more readers who join our growing band of site supporters, the better we can make MotoMatters.com, and the more readers will get out of the website. You can find out more about subscribing to MotoMatters.com here.

If you would like to buy a copy of one of these photos, you can email Thomas Morsellino

I don't know if Peter or David explained it for subscribers, but anyway:

What's the 'chamber' attached behind/below the lambda sensor on the KTM moto3 exhaust? (picture of the 'naked' bike)

I believe it is a Helmholtz resonator. It can be used as a muffler at a certain rpm.
In this case however, I think it is tuned to improve performance at a one point in the powerband (to smoothen the curve).

When you look at the picture of the Honda exhaust, you can also see one on the right. This is an 'inline' version which is used to create a larger tuned length which was previously done with a loop under the seat unit.

It reminds me of a Yoshimura duplex exhaust I had on my 1986 GSXR1100. Huge increase in low end torque, still screamed up high. Those were the days ..

Below a better picture of a similar resonator... 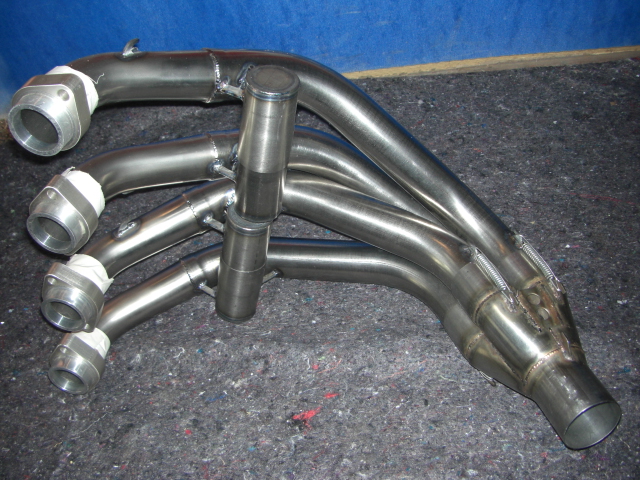 Something new every day :)  Thanks a lot!

YW. Compared to the stock pipe on the GSXR1100 the Duplex pipe brought the torque peak down about 1000 rpms (seat of pants, not dyno'd). The holes leading into the duplex chambers were quite small so that high-flow exhaust would more or less bypass the chambers while at low rpms they would come into play. Simple and effective

Always so cool to see the mechanical artwork of these machines in detail. The first time I saw a MotoGP bike in person was at Indy. Couldn’t get too close but close enough to see all of the cool billet, titanium and carbon fiber cool bits! Good stuff

All that effort to cool Marquez' rear brake and the line is rubber? I get that the two aren't necessarily related, it's just surprising to see when even club level racers often install braided rear lines (whether they use them or not).

Well spotted, so what do we take from this.

A. Braided hoses are over rated?

B. Honda OEM Rubber hoses are the best option??

I have been told the lines are braided, but the braiding is not external. In other words, they are reinforced.

Is the big issue with a booted foot operating the rear brake, just one reason why a lot of riders use a thumb brake: much higher degree of control.

I know one ex-WSB/GP racer and multi-national champion Downunder who used to introduce a small amount of air into the rear brake hydraulics because the resulting spongy lever made it much easier to control the rear brake. I'm guessing Marquez also prefers a rear brake that doesn't have that "lightswitch" feel, and the rubber line will just soften/dampen the action slightly.  Looking at the size of the (albeit vented) rear brake rotor he is definitely NOT after maximum stopping power.

looks like a rubber sheath to me; maybe protecting the swing arm.

It looks like an intermediate, but Michelin doesnt bring them in Motogp

For this year, Michelin have replaced the old slicks they were using as transport tires with production tires. These are Michelin Power Cup Evo tires, a tire meant for track and road use. If Michelin are in MotoGP to help promote the brand and associate itself with high performance products, what better way than to have MotoGP bikes rolling around on their production tires, which anybody can buy?

Quote: " The carbon fiber plates which are fitted below the front wheel axle. They are always fitted together with the spoiler for the rear wheel. "

Thanks for that info, that's very well spotted. What appears to be true (and what I was trying to say in the captions) is that Ducati never uses the rear swingarm spoiler without the wheel covers. They are used to help clean up the air to generate more force on the rear spoiler. Your observation does mean that there is some value for Ducati in using the front wheel covers on their own. Reducing drag, perhaps? Very interesting.

Swingarm Attachment
(Finally we have an ok phrase. Like swearing in front of your parents. "Tire cooler? Please. Spoiler? Aero?" "No using the S or A word." "Ok Mom...")
;)