Protective equipment and a safe distance apart: Motorcycle racing has always been ready

Cal Crutchlow got caught out in a crash in warm up, fracturing a scaphoid. One of two rider forced to miss the race due to injury

Suzuki's Alex Rins was the other, breaking his arm in a crash during qualifying. It would be a tough weekend at Jerez

If anything, the masks make MotoGP riders look even more badass

Andrea Dovizioso had never scored a MotoGP podium at Jerez until Sunday. The best possible start to the 2020 MotoGP season

Jerez showed that KTM have arrived. Pol Espargaro was genuinely competitive. This is a true MotoGP machine now

If you had said in 2016 that Valentino Rossi would have stood aside to let Marc Marquez pass, you would have been laughed out of the circuit

KTM, Ducati, Aprilia: MotoGP 2020 style is closer than ever

Man of the moment. First win for Fabio Quartararo, but definitely not the last

It was a good weekend all round for Ducati. Pecco Bagnaia had the kind of race Ducati expected of him in 2019

Foreshadowing, I think they call it

Take away Brad Binder's excursion on lap 7, and he had the pace for second. Big things expected of the South African

If you'd like to have very high-resolution (4K) versions of the fantastic photos which appear on the site, you can become a site supporter and take out a subscription. A subscription will also give you access to the many in-depth and exclusive articles we produce for MotoMatters.com site supporters. The more readers who join our growing band of site supporters, the better we can make MotoMatters.com, and the more readers will get out of the website. You can find out more about subscribing to MotoMatters.com here. You can also see these photos and all our subscriber material on our Patreon page.

If you would like to buy a copy of one of these photos, you can email Cormac Ryan Meenan

With dust settled the KTM and Binder stick out for immediate praise. Quarty and Yamaha of course, continued wonders. Pecco. Miller, again.

We can mourn Suzuki's zero. The Aprilia started the week bright but lost lustre. Valentino felt the heat, and retired with a telling "but if I'd finished I could have won, no?" There is some foreshadowing, did he just pivot or was that off hand frustration and disappointment? Noting that he was the other Soft front besides Maverick. It was problematic, overheating.

Orange is ON. Brad Binder looks real. #33 becomes him, more than #41 (A.Espargaro and a few behind #44). Almost half weight shaved over #88. It has been a good while since Marco Melandri was on fire and exciting. We are ready. So is he. So is the bike.

Listen to his perspective and attitude. Ominous? As mentioned w/o the 26 seconds lost in his baja trip he had the pace on paper to finish 3.275s behind Quartararo, second place potential. In the dry KTM got its best finish of 6th Sunday.

"I locked up the front wheel a bit and when I put the angle to keep the bike turning I lost the front," Binder explained. "I just managed to pick it up and took a trip through the gravel, which messed up my race obviously and left me 26 seconds down."

He was the fastest man on track in four of the last five laps and feels he had a chance of finishing in the top five. He was quick to warn it's unlikely he could have set the same lap times if he was battling intensely with other riders.

"I had great pace, but I was riding around on my own," Binder explained. "When you are behind the other guys there is dirty air and it’s quite different. It’s not just slipstream down the straight but it is also under braking; it pulls you in and you get sucked in when someone in front is braking, so it’s a bit different for sure."

"I believe looking at everything afterwards that I stand a good chance of finishing in the top five with my rhythm and that would have been fantastic, but it wasn't the reality!"

"Also there is a lot more pressure when you are racing up-front with the top guys instead of 20 seconds behind and you can just chip away at it."

"[The mistake] is obviously super-disappointing but you have to be realistic; it is my first GP and mistakes are going to happen."

"I need to say sorry to my team because today we could have done a good job and taken a good result. At the end of the day we live and we learn. I made a mistake and I won’t do it again.

"Let’s keep our heads up, keep this work ethic going and see what we can do."

Who thought it was a good idea to take riders out of the shaded (and likely air conditioned enclosures) and force them to stand on the hot track? From the angle of their shadows, this could have been early in the day, but why divert them from preparation (hydration, etc.?) Seems like they're treating riders like props.

That would be the same people who organise the start of season group photo every year, I guess.

It is tradition to do a pre-season photo, here is last years: 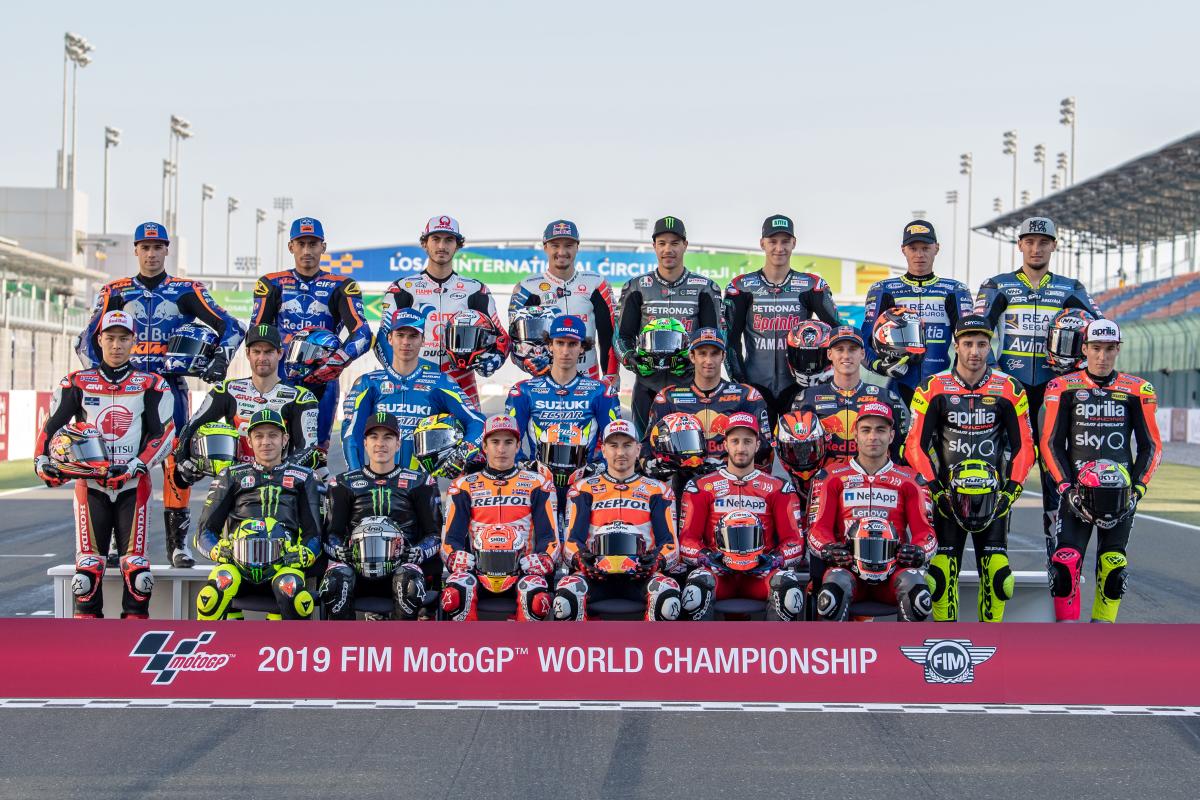 This was the first round.  I'm fairly certain all you're seeing is the traditional photo adjusted for present restrictions.

Speaking of which, who else of you were counting the flagrant breaches of covid protocol in the post race celebrations?  And throughout the weekend why were some folks wearing full mask and face shield while others wore a mask only, and others wore nothing at all (the latter mostly riders)?  I just found it interesting.  Are there differing levels of protection required depending upon your role, or is it all just still a bit random?

LOVE the number, Brad. Looks from here as if the podium just got a bit more crowded, this kid is gonna be taking on Fabio in a few races. That is gonna be some fun! Pecco seems ready (at last? no, he's a soph not 29) to join the crowd at the front, too. I have a feeling Iker is going to develop quickly with the new and improved KTM under him; seems to be a savant on 2 wheels. Jack has that last half step left to go, won't be long now, he could get his first non-weather win in Austria. Dovi makes chicken salad outta that (very fast) truck but he lacks the last 0.1% to dig in and grab the title. The list of plausible winners is long even without the missing (...get well soon, all...) in the shortened and compressed schedule. I think it favors the young, brave and resilient, so......Fabio on a satellite Yamaha. Or will the supply of trick parts suddenly develop supply chain issues? Hmm,,,maybe Herve has some insight. This is gonna be a wild ride and I'm hanging on