So Vietti gets a 20 point advantage over his main rivals because he was not fast enough to keep up with them! All riders in the second race should have been given half points.

Is a bit of a disaster but you can come up with scenarios which make the rule fair to A unfair to B, the other way around backwards and upside down. It was a restarted race not a short race. Some didn't make the restart. The hand of fate.

If this would have happend to a group of riders from position 20 to 30, few people would have objected…

the entire field save five went down? Three? One?

At some point they would have had to make an exception. I guess that they had enough riders and bikes in this case to have a race for broadcast purposes.

Curious how long it took from the showing of the red flag to the start of the warm-up lap for the re-start. Maybe that would be more reasonable than the five minute rule.

I think the 5 minute rule comes from finishing a race. In a normal race finish, any rider crossing the line more than 5 minutes after the leader has finished will be 'not classified' in the results because they are considered not to be actively participating. Exceptions can be made in certain circumstances. In the case of a mass pile up it does seem a bit arbitrary. I don't think there is any definition of how many riders are needed to make a race. A race restart must be attempted unless it's not possible to restart the race. I guess only one rider remaining is not a race and therefore, not possible to restart the race. The last standing lucks out on the win and they roll back. A two rider race ? The rules say yes ! They'd have to spice it up and have the non-runners throw rotten fruit at the slowest turn on the track.

This also reminds me of the race a few years ago--too lazy to research but you'll know the one--where on a drying track Miller, and only Miller, put on slicks on the grid. They delayed the race as everyone else copied him, and did not make the rest of the field start from pit lane. In that case, if memory serves, RD clearly bent the rules.

....4 years ago.... The other riders didn't start in the pit lane as it was deemed too dangerous.

I think it was Millers first pole.

I think currently you can have 10 riders max starting from the pitlane for any reason. If you get 11 or more then it's a delayed start. I'm not sure if the riders in that case receive a penalty. They've tried to reduce any advantage gained from changing tyres between the pre-race time limit and the actual start of the race. No matter how it's done, it's a ride through. That's a shame in some respects. Always nice to see someone grab the chance and take the gamble. It is still possible that changing to wets could gain you more in one lap than a ride through would cost you because if the rain was that bad every rider will be swapping bikes and therefore having a 'ride through' also. However, if the rain suddenly arrived to that level, then the race start would probably be delayed rather than sending a grid of slicks in close order.

Delaying/cancelling the start in 2018 was exactly what they should have done. It is a nice photo though.

Hey, I need to look it up but...as I recall the 5 min rule came in because of an odd occurrence where someone caused a crash that red flagged a race which they then technically won? Does anyone else remember this vaguely?

I think if the red flag comes out and the race is not restarted because it's over 2/3rds distance or impossible to restart then you have already finished the race even if you never get out of the gravel. The race ended the lap before and.....a bad memory returns...

I don't want to remember anymore. Never. 'Rider A' can just go away forever.

Teams aren't allowed any adjustments within 3 minutes of the start, if they want to make any they have to go to the pits and  start the warm up from the pit lane and join the back of the grid for the race start. With Miller on pole, i think the next rider on the grid was effectively in 16th place. 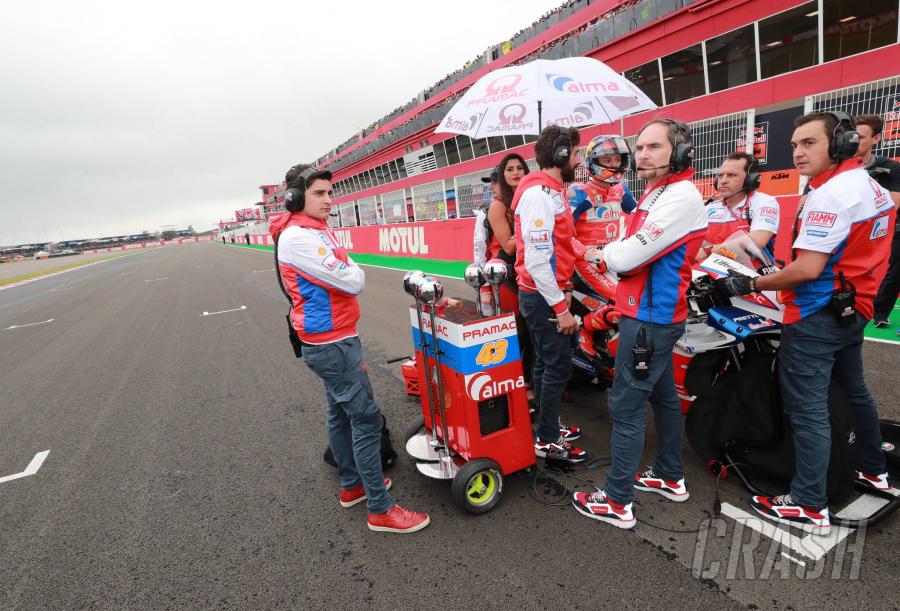 "They then came up with the solution which definitely isn't in the rule book."

Agree, obviously. The sheer number of riders made them bend/break the rules on the spot?

David describes two good reasons for the 5 min rule, but omitted the most important, which is to keep the broadcast schedule moving.

I think that was one of the rules changed as a result of ARG 2018. They now start from the pitlane, take their usual grid position but must perform a ride through during the race.